Goo Systems took part in the recent Home Entertainment Expo at the New York Hilton. Organized by the publishers of such industry bibles as Stereophile, Ultimate AV and Home Theatre, the Expo brought together manufacturers, distributors and retailers of high performance audio/video equipment to present their wares to enthusiasts, hobbyists and journalists.

The Goo Systems demo room featured a 100″ screen, made from a Sintra substrate coated with a rolled application of Screen Goo High Contrast Coat, illuminated by a Sim2 Domino 30H DLP projector. The Goo/Sim2 combination provided a stunning picture with excellent contrast and that special sense of depth and dimensionality exclusive to Screen Goo. Many attendess graciously shared their opinion that the image in the Goo room was the best they’d seen at the show and more than a few were taken aback by how affordable the Goo/Sim2 combination was. They were even more impressed when we pointed out that the video source was a standard 480i component video DVD signal fed directly to the Sim2 projector. As at the recent Festival du Son et Image in Montreal, exquisite sound was provided by a Genelec 5.1 active home theatre speaker system and a B&K Reference 50 S2 pre-amp/processor.

After closing on the first day of the show, we received a special treat when Dale Cihi of

Chanel exhibition at the Metropolitan Museum of Art. Many of the exhibits consisted of cubes constructed of 9 foot by 12 foot panels made from transparent plexiglas, treated with Screen Goo Rear Projection coating by Video Filmsystems Inc. Synchronized projected images provided tasteful backdrops for some of the most iconic fashion designs of the 20th century. We’re thrilled and humbled that the organizers chose to have our products play a small role in this fantastic exhibition. We strongly encourage readers living in or visiting the New York City area to experience this once in a lifetime display.

Our itinerary also included a visit to the

Museum of Modern Art (MoMA) where we were greeted by a large wall on the second floor which had been transformed into a high quality projection surface by the application Screen Goo. A video transfer of Hollis Frampton’s fascinating and humourous 1969 16mm film, Lemon was being shown to great effect. Once again, we’re thrilled that our products have a role to play in presenting this fabulous work to guests of the museum.

All in all, it was great week for Goo Systems in Manhattan and we look forward to seeing you all at next year’s Expo.

We’d like to thank Greg Nicoloso and Aric Hasselbring of Sim2 USA for the gracious loan of their Domino 30H projector, Michel Plante and Doug Sills of SF Marketing for providing the top notch audio system and the Home Entertainment Expo organizers for providing such an excellent venue for us spread the word about Goo. Thanks as well to Frank Culotta and Greg Cancel of Symco for their enthusiastic participation. 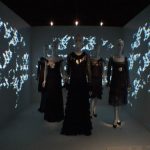 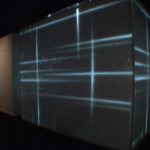 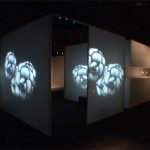 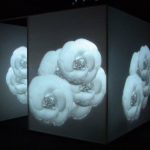 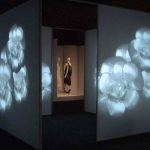