Matthew Barney: Redoubt is a major new direction in the work of the renowned American artist and film-maker. The exhibition features a series of imposing and intricate sculptures cast from fallen trees and over 40 engravings and electroplated copper plates.

The feature-length Redoubt film was shot during the winter of 2016-17 in Idaho’s rugged Sawtooth Mountains and continues Barney’s long standing preoccupation with landscape as both a setting and subject in his films. By layering classical, cosmological, and American myths about humanity’s place in the natural world as well as political currents at play, Redoubt weaves a lyrical and universal narrative.

Structured as a series of six hunts that unfold over seven days and nights, Redoubt loosely adapts the myth of Diana, goddess of the hunt, and Actaeon, a hunter who accidentally trespasses on her and is punished. Barney himself appears in the film as an artist in the employ of the US Forest Service. He tracks and observes the hunter while making a series of copper engravings, which form the basis for the artworks included in the exhibition. 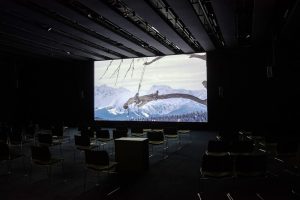 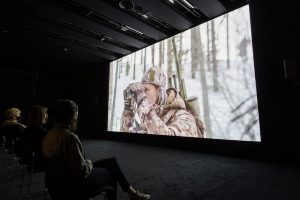 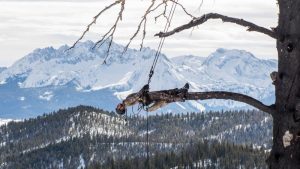