Cyberia is a modern Internet Cafe located at the 7th floor of Central World, a large and modern shopping mall at the heart of downtown Bangkok – the building used to be the World Trade Center Thailand.

Cyberia is run by John Nouveau, a famous Thai singer.

There is a medium size stage in the hall with an area in front that is large enough to stage a mini concert. The stage is surrounded by many computer stations providing internet and on line game services. There is a 3-story platform surrounding the stage which looks like a small arena with a stage in the middle which make for a perfect setting for holding online game contests where fans on the platform can watch the contests in real time through the 10 square meter screen behind the stage.

The 10 square meter screen has been coated with Screen Goo High Contrast which preserves contrast and provides great brightness levels in this area where lots of mood/stage lights are present.

Cyberia is to be used by artist John Nouveau as his broadcast site for his 2-weekly broadcasts on local TV from time to time.

This project was realized by Mr. Suriya (Teddy) Sakonsathien of Thai Screen Central 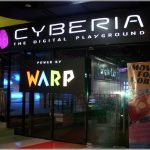 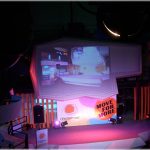 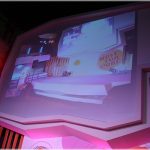 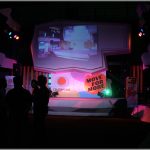 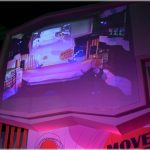 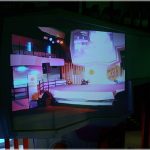